Fire cider was initially a recipe shared by Rosemary Gladstar. Over the years fire cider became a generic term among the herbal community referring to spicy vinegars. A few weeks ago, I shared the traditional recipe in this blog post. Today I wanted to dedicate a post just for it. I know it’s nearly spring time and maybe a different topic was more befitting, but I’m sure there’s still some people out there who could be fighting off sinus infections and colds. Also fire cider is a remedy that stays for a long time, so you can have it made now and ready for winter time.

Fire cider is ideal to ward off colds, respiratory infections and thin out & expel excess mucus in the case of sinus congestion. It also boosts circulation in the body with a spicy kick. It’s taken by the dropperful or spoonful, depending on the person’s palette or the strength of the vinegar. If you experience gastrointestinal inflammation, heartburn and peptic ulcers, you might want to limit your intake or stay away from it.

The traditional base remedy includes ginger, garlic, onions, horseradish, jalapeño or cayenne, apple cider vinegar and raw honey which is added after the vinegar is ready and strained. In addition, you could add whatever herbs you like. 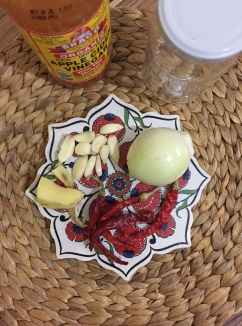 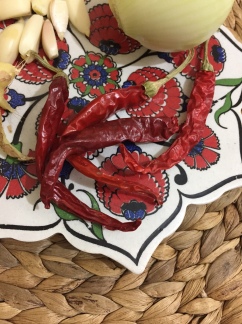 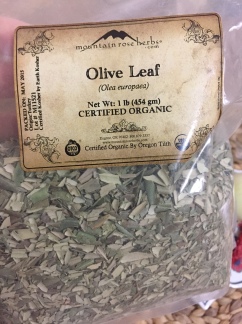 I added olive leaf and powdered turmeric in addition this time. Olive leaf and turmeric have immune boosting properties. Olive leaf is an antiviral. I like to use olive leaf in fire cider especially because I feel there is a sacredness to it in Islamic tradition. In a section of Dalail al-Khayrat, which is a book of litanies dedicated to the Prophet Muhammad, the author Imam al Jazuli pleads to God with ‘His name that is written on the olive leaf’. Likewise there’s mention of the olive both in the Qur’an and narrations of our master Muhammad. According to tradition, the three gifts that were presented to the newly born ‘Isaa (Jesus) were myrrh, frankincense and actually turmeric, rather than gold.

As was the case last time I made fire cider, I didn’t have horseradish in hand. I don’t think one can find that in Istanbul. Also instead of jalapeños I used hot red peppers in dried form. I did not de-seed them so I am a little worried about the level of heat! I threw the onion, garlic cloves and ginger in the blender instead of chopping them up by hand. 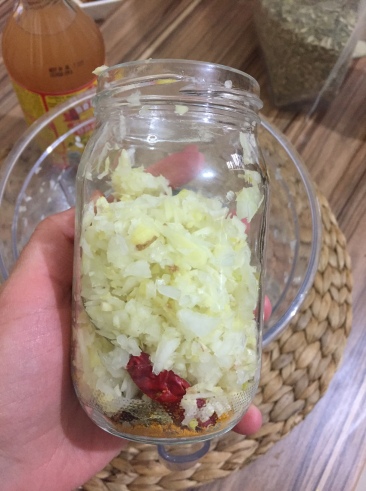 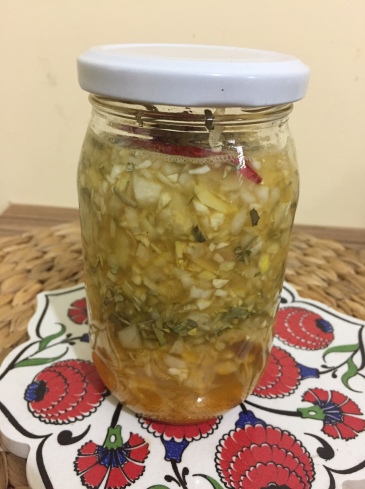 I added all the ingredients into the glass jar and added raw apple cider vinegar all the way to the top, covering all the ingredients. This needs to sit in a dark, cool place away from direct sunlight for 4-6 weeks. Don’t forget to label it with ingredients and date like I did 🙂 but I know I made this on February 26th as that’s when the pictures were taken on my phone so this needs about another week or two to go. Every now and then, give it a gentle shake. Once the infusion time is over, strain it using a cheesecloth. Add honey to the final product according to personal taste.