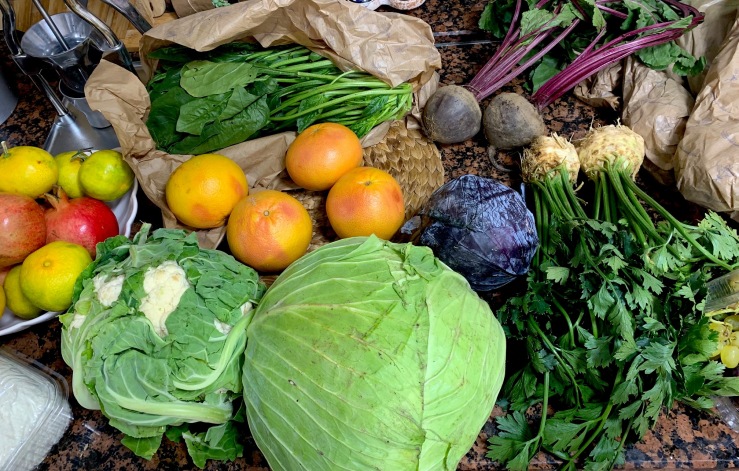 Here in Istanbul, we went through a very short and deceiving phase of freezing weather all of a sudden at some point back in September. Then all of a sudden it was really warm again, and all of a sudden I realized that maybe I had taken out the winter clothes a little too early. The good thing though is that I am at least organized for the winter now, washed everything, gave away what is probably unnecessary and still in good shape, and also got really confused in the process about why nothing is fitting my daughter. She must have had a growth spurt over the summer, because even pants that fit her a few months ago are now uncomfortable. I do forget she’s turning 4 very soon.

So I have been ordering most of my groceries from an organic farm in a village a few cities away for the last 2.5 years or so, and obviously everything is seasonal. So you’re not going to find eggplants and cucumbers, for example, in the winter. I find that by the end of a season, I am really looking forward to what the next season has to offer. So last week was the first week I had my first ‘fall’ delivery, and I was so excited to finally prepare some beet root, spinach, cabbage and whatnot for the week ahead. Of course there’s still some ‘summer’ staples available, like grapes and figs, but Fall is finally coming through.

I am not going to be sharing any recipes, but I want to give a few quick ideas on what you can do with some of the seasonal vegetables I got last week and what I did with them myself.

Also, a note on eating seasonally… I know in some countries you can still find fruits and vegetables that are out of season but are still produced without hormones and pesticides, usually shipped in from other countries or states. However, eating seasonally is ideal because foods that are in season correspond to what our bodies need the most during the current season. Have you ever craved watermelon on a cold winter day?

Other than crunching on most of the cauliflower head just straight up raw (my kids love raw vegetables but once they’re cooked… it’s a battle), we made it into a low carb cauliflower ‘mac ‘n’ cheese’. Honestly I prefer it just roasted until really tender, but it was going to be the main dish rather than a side dish that day so I had to be more creative. I usually roast beet root before storing to use in salad mostly, but I ended up boiling them instead – without removing the skin – and storing them in the fridge. Every time I make salad, I cut some into the salad, or I serve on its own as a side. You can sauté the tender shoots with some olive oil or butter and serve as a side. I grated the celeriac root with some carrots and sliced an apple into small, thin pieces to make a salad with a yogurt, olive oil & lemon juice dressing. The spinach was sliced and washed thoroughly before cooking with a very little bit of water just to allow some steam to develop in the covered pot on low heat, just until tender, and stored in the fridge. We used it in the morning to make some scrambled eggs with spinach. You can grate some aged cheese on top upon serving, or add some homemade pesto like we did. So far I have used both cabbages to make salad, once slaw and once just regular salad, thinly sliced with some tomatoes and cucumber and balsamic vinegar dressing, and I still have a ton of cabbage left so I will be using the white cabbage to make a delicious & simple cabbage stir fry with olive oil, turmeric, salt & red pepper until the very thinly sliced cabbage is extremely tender and well cooked. The fruits, we just enjoy straight up raw (except for the grapefruit which I prefer for juicing), and we do that as a snack in between meals or first thing in the morning before breakfast, because fruit is better before a main meal as it is digested quicker than other foods. How I missed the glorious pomegranate, also a favorite of my kids’. Oh, and before I forget, this was the last week I ordered some grapes, because you can tell they’re starting to say goodbye, so I washed them up and froze them in a container after removing from the stems. Great snack. Not pictured, I have some pumpkin which I will be using to make a meal with slow-baked rosto & cloves.

What’s your favorite way of using Fall vegetables (and fruits?)